Before There Was King: Lemuel Haynes--Black Puritan 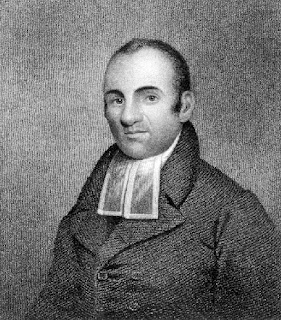 For as many of you as were baptized into Christ have put on Christ. There is neither Jew nor Greek, there is neither slave nor free, there is neither male nor female, for you are all one in Christ Jesus. And if you are Christ's, then you are Abraham's offspring, heirs according to promise. - Galatians 3:27-29 ESV

{I guess this is my way of gettin' Black History Month started a couple of weeks early. But, Lemuel Haynes is definitely worth learning about. Not only is he a major player in the abolitionist movement in the U.S., but also has a significant place in the reformed faith as a person of color. Enjoy...}

From Wikipedia, the free encyclopedia:

Lemuel Haynes (1753-1833) was an influential African American religious leader who argued against slavery.

Little is known of his early life. He was born in West Hartford, Connecticut, to a reportedly Caucasian mother of some status and a man named Haynes, who was said to be "of some form of African extraction". At the age of five months, Lemuel Haynes was given over to indentured servitude in Granville, Massachusetts. Although serving as an agricultural worker, part of the agreement required educating him. Through accompanying his masters to church, he became exposed to Calvinist thought and religiosity.
At about twenty years of age, he saw the Aurora Borealis, and, fearing the approach of the Day of Judgment as a result, he soon accepted Christianity. Freed in 1774 when his indenture expired, Haynes joined The Minutemen of Granville. In 1775, he marched with them to Roxbury, Massachusetts following the news of the Boston Massacre. In 1776, he accompanied them in the garrisoning of the recently captured Fort Ticonderoga. He returned to his previous labors in Granville after the northern campaign of the American War of Independence.

In response to the events at the Battle of Lexington, Haynes began to write extensively criticizing the slave trade and slavery. He also began to prepare sermons for family prayers and write theologically about life. The Scripture, abolutionism, and republicanism impacted his published writings. Haynes argued that slavery denied black people their natural rights to "life, liberty and the pursuit of happiness". Paralleling the recent American experience with oppression to the slave experience, Haynes wrote: "Liberty is equally as precious to a black man, as it is to a white one, and bondage as equally as intolerable to the one as it is to the other".
By the 1780s, Haynes became a leading Calvinist minister in Vermont. His contemporary White republican and abolitionist thinkers saw slavery as a liability to the new country, but most argued for eventual slave expatriation to Africa. The American Colonization Society (founded in 1817) was one such group. Included among its supporters were people such as James Madison, James Monroe, Henry Clay and Daniel Webster. In contrast, Haynes continued to passionately argue along Calvinist lines that God's providential plan would defeat slavery and lead to the harmonious integration of the races as equals.

After his death, white abolitionist thought would argue for the freedom of African Americans, but they tended to continue to see African Americans as inferiors. Echoes of Haynes' arguments for equality would again be heard only in the time of Martin Luther King.

John Saillant (2003, p. 3) writes, "[Lemuel Haynes'] faith and social views are better documented than those of any African American born before the luminaries of the mid-nineteenth century]".

and have put on the new self, which is being renewed in knowledge after the image of its creator. Here there is not Greek and Jew, circumcised and uncircumcised, barbarian, Scythian, slave, free; but Christ is all, and in all. Put on then, as God's chosen ones, holy and beloved, compassion, kindness, humility, meekness, and patience. - Colossians 3:10-12 ESV

"Here then I could conclude; but I must not forget the poor negroes; no, I must not. Jesus Christ had died for them, as well as for others." - George Whitefield

I am extremely interested in reading about Haynes, but I'm tired and just wanted to give a shout out. I'll say something sarcastic here later.

That's weird. Here's a link to a link to my page.

I am related to Haynes and am doing a project on him at my school.