When The Church Came to Clowns... 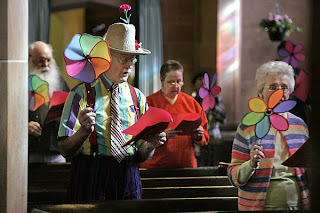 What you are about to witness is probably one of the most appalling things that we will ever witness in our lifetime. The clip being shown here is not a spoof; this is a real church mass being conducted...by clowns. That's right. I said it. Clowns.

This is what happens when the gospel of Jesus Christ gets watered down to the point that it loses it's power. How on earth could anyone in there right mind expect to be taken seriously about their beliefs when you are now parading around in the garments of the international icon for foolishness?! When have you ever heard of anyone taking a clown seriously, with the exceptions of John Wayne Gacy and Stephen King's It. The world may not take it seriously, but any Christian that truly loves Jesus Christ aright should. Much like the two Clowns mentioned, this too is a killer. Choking the life out of authentic worship is every bit as lethal as any serial killer clown and the stakes are much higher. The Scripture gives warnings about burning strange (or unauthorized) fires before God and this has to be one of the strangest (if not the strangest) that I've ever seen. Pray for all involved in this spurious idea of "worship"; that they would be convicted of this travesty and come to a true realization of the holiness of God.

Remember the Sabbath day, to keep it holy. - Exodus 20:8 ESV

Now Nadab and Abihu, the sons of Aaron, each took his censer and put fire in it and laid incense on it and offered unauthorized fire before the Lord, which he had not commanded them. And fire came out from before the Lord and consumed them, and they died before the Lord. - Leviticus 10:1-2 ESV

Soli Deo Gloria,
Shon
Posted by Shon at 2:43 AM