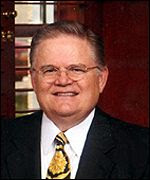 And the Word became flesh and dwelt among us, and we have seen his glory, glory as of the only Son from the Father, full of grace and truth. (John bore witness about him, and cried out, “This was he of whom I said, ‘He who comes after me ranks before me, because he was before me.’”) And from his fullness we have all received, grace upon grace. For the law was given through Moses; grace and truth came through Jesus Christ. No one has ever seen God; the only God, who is at the Father's side, he has made him known. - John 1: 14-18 ESV


So let's take the verse we just read above into consideration as we watch and listen to this clip by Pastor John Hagee.

Just when you thought it couldn't get any worse, it does!! John Hagee releases a new book that makes outlandish claims as to who Jesus Christ "really" is and how that relates to the Jewish Nation (Israel). Here are a few thoughts that I wanted to share...enjoy!!

Therefore the Lord himself will give you a sign. Behold, the virgin shall conceive and bear a son, and shall call his name Immanuel. - Isaiah 7:14 ESV

For to us a child is born,to us a son is given; and the government shall be upon his shoulder,and his name shall be called Wonderful Counselor, Mighty God, Everlasting Father, Prince of Peace. Of the increase of his government and of peacethere will be no end, on the throne of David and over his kingdom, to establish it and to uphold it with justice and with righteousnessfrom this time forth and forevermore. The zeal of the Lord of hosts will do this. - Isaiah 9:6-7 ESV

Now the birth of Jesus Christ took place in this way. When his mother Mary had been betrothed to Joseph, before they came together she was found to be with child from the Holy Spirit. And her husband Joseph, being a just man and unwilling to put her to shame, resolved to divorce her quietly. But as he considered these things, behold, an angel of the Lord appeared to him in a dream, saying, “Joseph, son of David, do not fear to take Mary as your wife, for that which is conceived in her is from the Holy Spirit. She will bear a son, and you shall call his name Jesus, for he will save his people from their sins.” All this took place to fulfill what the Lord had spoken by the prophet:

“Behold, the virgin shall conceive and bear a son,and they shall call his name Immanuel” (which means, God with us). - Matthew 1:18-23 ESV

Brothers, my heart's desire and prayer to God for them is that they may be saved. For I bear them witness that they have a zeal for God, but not according to knowledge. For, being ignorant of the righteousness of God, and seeking to establish their own, they did not submit to God's righteousness. For Christ is the end of the law for righteousness to everyone who believes. For Moses writes about the righteousness that is based on the law, that the person who does the commandments shall live by them. But the righteousness based on faith says, “Do not say in your heart, ‘Who will ascend into heaven?’” (that is, to bring Christ down) or “‘Who will descend into the abyss?’” (that is, to bring Christ up from the dead). But what does it say? “The word is near you, in your mouth and in your heart” (that is, the word of faith that we proclaim); because, if you confess with your mouth that Jesus is Lord and believe in your heart that God raised him from the dead, you will be saved. For with the heart one believes and is justified, and with the mouth one confesses and is saved. For the Scripture says, “Everyone who believes in him will not be put to shame.” For there is no distinction between Jew and Greek; for the same Lord is Lord of all, bestowing his riches on all who call on him. For “everyone who calls on the name of the Lord will be saved.” How then will they call on him in whom they have not believed? And how are they to believe in him of whom they have never heard? And how are they to hear without someone preaching? And how are they to preach unless they are sent? As it is written, “How beautiful are the feet of those who preach the good news!” But they have not all obeyed the gospel. For Isaiah says, “Lord, who has believed what he has heard from us?” So faith comes from hearing, and hearing through the word of Christ. But I ask, have they not heard? Indeed they have, for “Their voice has gone out to all the earth, and their words to the ends of the world.” But I ask, did Israel not understand? First Moses says, “I will make you jealous of those who are not a nation; with a foolish nation I will make you angry.” Then Isaiah is so bold as to say, “I have been found by those who did not seek me;I have shown myself to those who did not ask for me.” But of Israel he says, “All day long I have held out my hands to a disobedient and contrary people.” - Romans 10:1-21 ESV

Now Jesus did many other signs in the presence of the disciples, which are not written in this book; but these are written so that you may believe that Jesus is the Christ, the Son of God, and that by believing you may have life in his name. - John 20:30-31 ESV