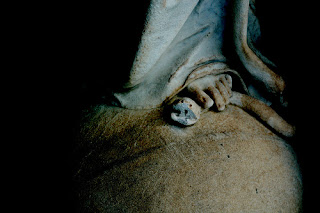 "Do not judge by appearances, but judge with right judgment.” - John 7:24 ESV


Contrary to popular belief
You can’t always trust your ocular perceptions…
That could lead you to deceit
And what you hear may be the latest edition
But you better employ your mind while you take in and listen
Senses with good intentions may be the standard
But without discernment, it’s just learning the problems without the answers
So don’t believe the hype behind all the woof tickets we buy
Like, “If she really had AIDS, she wouldn’t look that fly.”
Or “The only way outta the ‘hood is gettin' filthy rich…
And the only way to get rich is to sell a few bricks”
Don’t think that just because I’m not always tryin’ to smash chicks
Means that my libido is all jacked up or that I’m passive
Heterosexual homophobic nymphomania
Won’t make you more of a man, but will leave a legacy that’ll stain ya
So I speak softly and carry a big stick
But it’s not the stick that’ll hit you, but a book of sixty-six
And just because I speak softly
Don’t mean that you won’t get licked
By God’s grace, I’m Gracie amazin’
So my groundwork is sick
No, I don’t fight for a livin’, but I will fight the good fight
I’ve got a mouth for war – dying to live ‘til we receive the crown of life
To the contrary, popular opinion is highly overrated
And belief separate from the truth
Only leaves you hopeless and jaded…