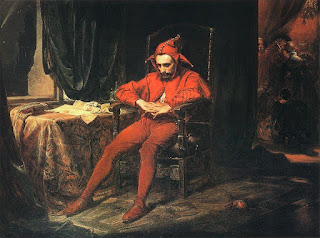 Bring in the clown

Beat him down
It's time to court-martial the jester
Let's heckle the herald
Wear him down 'til he recants his confession
Teach him a lesson
We'll show him
Who’s really playing the fool
And if he won't listen to reason
Then we'll tighten the screws and ridicule
For his ridiculous rants and rhetoric
Label him as a terrorist
Tolerate him as entertainment
And tell 'em his message
Makes him a pessimist
Limit his access to the residents
And his words become irrelevant
We can target him as a heretic
Making a mockery of his benevolence
Never address him as a martyr
Denounce the prominence of his Father
If he's a bastard with no inheritance
Then the people won't even bother
Color him reckless and a derelict
Unfit to be a prophet
But know that if he's truly a man of God
We'll never be able to stop him...