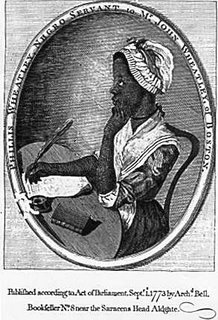 'Twas mercy that brought me from my pagan land
Taught my benighted soul to understand
That there's a God, that there's a Saviour too:
Once I redemption neither sought nor knew
Some view our race with scornful eye,
'Their color is a diabolical dye'
Remember, Christians; Negros, black as Cain
May be refined and join th' angelic train.

~On Being Brought from Africa to America, by Phyllis Wheatley (America's First Black Poet)

In light of our current holiday (Martin Luther King, Jr. Day) and with Black History month speedily approaching, there's no better time than the present to reflect upon the struggles and accomplishments of African-American people in this country, right? However, in our reflections, sometimes perspective gets lost in the spirit of the chase. We tend to take mantras such as "We Shall Overcome" and "Free At Last" and we rob them of their glory by our shortsightedness. This is why I find it appropriate to reflect on Ms. Wheatley's 'On Being Brought from Africa'. This poem's primary focus is on the overarching sovereignty and purposefulness of God in all of life.

Wheatley says that it was 'mercy' that brought her from her 'pagan' land. She was kidnapped and brought to America on a slave ship when she was about seven years old. Yet, she calls it mercy. Today, this statement may be seen, even in the so-called "Christian community", as controversial. Yet to Wheatley, this is a good thing because it brought her to salvation, despite the means that were used to attain it. After all, as she states, it was by this act that her 'benighted' soul was taught 'that there's a God and a Saviour too'. In her biography it states that she was bought by a Boston family that took her in as one of their own and taught how to read and write (greek and latin as well), and even more particularly taught her in the way of Scripture. Wheatley, in her reflection upon the events of her life, clearly connects the dots for us. She is well aware that if not for the Hand of Providence putting her on that ship to America, she never comes in contact with the Wheatley family. If she never meets the Wheatleys, she never hears of God or Jesus Christ. This theme of sovereign mercy is unrelenting even as it turns to the social tensions of her day. Many saw blacks as being sub-human and evil because of their native ways and skin tone. Wheatley does not shy away from this at all as she recalls:

"Some view our race with scornful eye, 'Their color is a diabolical dye'."


Now, take note of her admonition in the final stanzas:


Notice that the petition is not to all of "white" America or even to the government. Her appeal is to the christians. Wheatley's primary concern for her fellow africans is not emancipation, but evangelization. Wheatley understands that the only way for them to be truly free is through the redemptive work of Christ on the Cross. Even as she herself was freed by her family, in the legal sense, all other forms of freedom are subordinate and secondary when it comes to the liberation of the soul through the Gospel. The reference to Cain helps to drive this point home. Cain was "marked" and "blackened" as punishment for the murder of his brother, Abel. Yet, while this was a curse, it was also God's way of showing mercy towards Cain, as it would protect him from the same fate that he had dealt to his brother. If anyone is to murder Cain their punishment will be sevenfold. The color of his skin gives him a chance for redemption; to repent of his sins and find peace with God, with whom, at the moment, he is at enmity (sadly, he does not). Wheatly, being a student of the Bible, is well aware of what this imagery will conjur up with the Christian family. She is appealing not just to the blackness of Cain's skin, but to the "greater blackness" of his heart, which is the way of all men who have never encountered Christ. While true that africans had been "marked" for slavery by the whites due to the color of their skin, behind the horrific history of the slave trade is a glorious history of redemption that is to be unfolded. This is the urgency in Wheatley's message. Seeing the work of Salvation through Christ in her own life has prompted her to seek true liberation of her enslaved people; a liberation by which no government can deliver. So, she restricts her message to the Body of Christ, urging them to remember the darkness that they once knew; calling to remembrance that while they were still in sin, darkened in their understanding, God reached out and saved them by washing them clean in the blood of Christ. Sin is the ultimate "slavemaster" from which she wishes to free her countrymen; once freed from sin, they will be free to be the bondservants of Christ.

This is my favorite poem of all time. Though short, it is pregnant with imagery and insight. The summation of it all is this: Even as we look back today, we cannot deny that much of this sentiment has been lost. I believe that Phyllis Wheatley gives us an accurate model of how we should see all the atrocities of our world from a Christian perspective, be it racism or any other forms of social injustice. Although they exist, we must understand that Providence is at work behind every action, though we may not understand or see it at that moment. Also, we must not lose sight of the fact that all of the wrongs of this world, are brought on by our own inherent sinful natures. We are all 'black as Cain' and 'benighted in our souls' apart from the redeeming work of Christ, regardless of our status or position in the world. It is the church's job as those who have been called out of the darkness, to take the light of Christ back into the darkness, understanding that Christ, and only Christ, is the answer to changing of the hearts and minds of men. Putting grace before race is the only way liberate all men and restore human dignity among the various peoples of the world. No matter what advancements are gained by any group of people or individual-- without Christ, they are still in bondage.

Amazing grace! How sweet the sound
That saved a wretch like me!
I once was lost, but now am found;
Was blind, but now I see.
'Twas grace that taught my heart to fear,
And grace my fears relieved;
How precious did that grace appear
The hour I first believed!
Through many dangers, toils and snares,
I have already come;
'Tis grace hath brought me safe thus far,
And grace will lead me home.
The Lord has promised good to me,
His Word my hope secures;
He will my Shield and Portion be,
As long as life endures.
Yea, when this flesh and heart shall fail,
And mortal life shall cease,
I shall possess, within the veil,
A life of joy and peace.
The earth shall soon dissolve like snow,
The sun forbear to shine;
But God, Who called me here below,
Will be forever mine.
When we've been there ten thousand years,
Bright shining as the sun,
We've no less days to sing God's praise
Than when we'd first begun.

"As for you, you meant evil against me, but God meant it for good, to bring it about that many people should be kept alive, as they are today." - Genesis 50:20 (ESV)

"Jesus answered them, "Truly, truly, I say to you, everyone who commits sin is a slave to sin. The slave does not remain in the house forever; the son remains forever. So if the Son sets you free, you will be free indeed." -John 8:34-36 (ESV)

"But whatever gain I had, I counted as loss for the sake of Christ. Indeed, I count everything as loss because of the surpassing worth of knowing Christ Jesus my Lord. For his sake I have suffered the loss of all things and count them as rubbish, in order that I may gain Christ and be found in him, not having a righteousness of my own that comes from the law, but that which comes through faith in Christ, the righteousness from God that depends on faith" - Philippians 3:7-9 (ESV)