5 Years Later: Hard Lessons on Terrorism, Evil and the Sovereignty of God 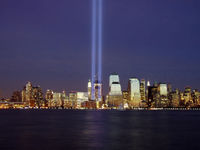 "In the fury of the moment, I can see the Master's hand; in every leaf that trembles and in every grain of sand." -Bob Dylan

I would like to think that after several years have past, I could put some distance between the events of September 11 and the anniversary by which it is now memorialized. Is it because it was a terrorist attack? Is it because I was a witness to the horrific event? Questions like these can go on forever. But whatever the case may be, every year seems like last year--always fresh as if no significant time has passed at all. I know that I'm not alone in this. Everyone has their stories. We can remember like it was yesterday.

Not only do the memories remain, but the questions remain as well. The peculiar thing that always seems to happen is, that for most, it's not so much a philosophical line of questioning, but a moral and spiritual one:

How could someone do something so evil?
Is there any hope for a human race that can produce this kind of corruption?

As the questions continue, they come to an inevitable conclusion:

If there's a God, why didn't he do something to stop this?
If God is so loving, why did he let all of those innocent people die?
If there is a God, why is there so much evil in the world?

I have heard various answers given by those in the camp of religion and faith. In many of the interviews and press releases, however, these answers seem to contradict and often times leave us lacking any real substance to hold on to. They also have a tendency to fall into two totally different lines of reasoning.

This first camp tends to think that God has done these things because he is angry with America. I remember hearing several prominent religious leaders spouting rhetoric about God taking down our "hedge of protection" due to the fact that we kill babies and we allow gays to marry. I think this is pushing too far to one end of the spectrum. I do believe that God can bring calamities and disaster as signs of judgment. He is God and he does what he pleases (Psalm 115: 3), just as he did in the days of Noah. But to single out a particular group of people's sins over my own is downright pharisaic and fool-hearted. If God did indeed use 9/11 as a way of judging America for its sins, I better make sure that I include myself in that bunch as well!! Jesus warned of this kind of thinking when two terrible disasters of his day had occurred:

When catastrophe hits, it is not our job to try to guess as to why they "had it coming". R.C. Sproul summarizes it this way:

We often ask the wrong question; we become concerned with why it happened to them. What we really should be asking is 'why didn't it happen to me'?

Jesus reminds those who are throwing accusations at the victims of those dreadful acts that instead of contemplating the sins of others, contemplate your own. If I believe that someone deserved it, I can best believe that I deserve it all the same (if not more). It is not our job to know why. As Deuteronomy 29:29 says:

The secret things belong to the LORD our God, but the things that are revealed belong to us and to our children forever, that we may do all the words of this law.

On the other side of the isle, we have our second camp. By using the word denial, I don't mean that those who fall into this category are delusional, but that they deny or limit the extent of God's activity in such catastrophic events. The best example I can give is from a couple of conversations that I had today, where each person stated that they were told by the leadership in their churches that God couldn't possibly have anything to do with something so evil--so heinous. This logic falls all the way at the other end of the spectrum. Also, much like its counterpart, it too is seriously flawed. While the other side believes that God acts in a heavy-handed manner, the denial camp would say that God loves his creation (people, in this particular case) and he would never do anything to harm to us. A beautiful sentiment, to be sure, but a survey of the Sciptures will point us to a very different conclusion :

"Shall we receive good from God, and shall we not receive evil?" In all this Job did not sin with his lips. - Job 2:10 ESV

Who has spoken and it came to pass, unless the Lord has commanded it? Is it not from the mouth of the Most High that good and bad come? - Lamentations 3:37-38 ESV

Is a trumpet blown in a city, and the people are not afraid? Does disaster come to a city, unless the LORD has done it? - Amos 3:6 ESV


These are definitely some of the harder sayings in Scripture in terms of God's involvement of evil. Verses like these may even leave many angry and unable to accept the idea of God's sovereignty if this is what it entails. But we must be careful. As John Piper states:

The evil that Satan causes is only by the permission of God. Therefore, Job is not wrong to see it as ultimately coming from the hand of God. It would be unbiblical and irreverent to attribute to Satan (or sinful man) the power to frustrate the designs of God.

To put it another way, if we stick with the denial position, we will find ourselves in a place without hope. For if God has not ordained catastrophic events within his Providence and Sovereign will, then he is not God and all is lost. This would be the only rational conclusion that we could come to. The verses above, while they are indeed hard to swallow, should ultimately bring us comfort. Even as evil seems to run wild, we should take heart in the fact that God is there and he is working all things for good of those who love him (Romans 8:28).

As Christians, it is times like these-- Sept. 11, Hurricane Katrina, etc. -- that we should be even more about the business of seeking to persuade the lost through the Good news of the gospel. We should remember Jesus' words to his fellow country men: "Unless you repent of your sin...". This should make us profoundly grateful for the grace that God has shown on us by giving us his son, and should compel us to share the message of Christ with others so that they too may partake of the goodness and mercy of God through the sacrifice of his son. If these events should teach us anything it should be this--

No matter how long, life is always too short. We are never guaranteed tomorrow. The aim of every man should be to seek the Lord while he may be found; because sometimes...


Now listen, you who say, "Today or tomorrow we will go to this or that city, spend a year there, carry on business and make money." Why, you do not even know what will happen tomorrow. What is your life? You are a mist that appears for a little while and then vanishes. - James 4:13-14 ESV


"To the ones left behind
Who are picking up the pieces
Of planes, bombs and buildings
Of innocence and evil
When the news, the noise and flowers die
And you still wake up alone
There's a God who knows every tear you cry
And this world is on his shoulders."


This post is dedicated to all those who were lost in the events of 9/11/01 and their families. Your heroism and bravery will never be forgotten.

Isn't evil in part a consequence of human freedom--of the freedom and contingency of the world God has created? The 9/11 attacks were carried out as part of a deliberate plan to do harm to the United States and its interests. The freedom that allows us to act in the world is the same freedom that allows individuals and groups to inflict cruelty and violence on others. I find questions about whether God was behind the 9/11 attacks offensive because their logic would also require us to believe that God somehow wills that millions of Africans die of AIDS or that tens of thousands of Iraqis die from bombs, torture, and militia violence.

The purpose here is not to make God out to be the author of evil by implicating him in the senseless murder of thousands of people. But once again, we must be careful not to go too far to the other extreme as well. The book of Job is a perfect case study in coming to grips with this. God allows Satan to attack Job, but even then, sets limits on what he (Satan) can and cannot do. Satan needs permission (he can only do because God wills it)!! We must be careful not to put the evil of sinful men and Satan outside of God's sovereignty. Job is never given a reason for his suffering, yet he still says, "Though He slay me, I will trust Him" (Job 13:15).

When dealing with God's sovereignty, it should not be a question of outcome (whether or not something good or bad will happen to me), but a question of trust; regardless of what may come-- Do we have faith to let God be God in ALL situations? That is the ultimate question.

It is not our place to know why God in his sovereignty ordains certain calamities and sufferings, but we must have faith that it is all a part of His perfect plan for good.

No evil is not a consequence of human freedom because there is no complete freedom outside of God. Evil on this world is a consequence of the ultimate and original sin of Adam. By eating from the apple and trying to become "like God" Adam sent all of mankind on a downward spiral from that point as he separated himself from God. God did sacrifice his son Jesus Christ to antone for mans sins but, evil and sin still exists because of Adam's original sin. Why does God allow much of the suffering that happens in the world to go on? I don't know but, that is not for me to determine why a divine being much wiser than any of us does what he does. My responsibility as a Christian is to trust in the father's wisdom that some suffering is allowed for some greater good. I find it somewhat offensive and naive to think that evil just happens because of us and that God cannot do anything to stop it because that opinion turns our God into a weakling who is somehow at the mercy of human's free will.
-Big Poppa Pump