A Resolve for the Ages: The Resolutions of Jonathan Edwards 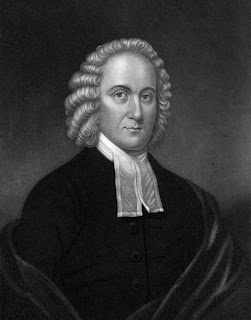 “New Year's Day - Now is the accepted time to make your regular annual good resolutions. Next week you can begin paving hell with them as usual.” - Mark Twain

By the grace of God, we've managed to make through another year!

However, I must confess that I'm not one who's big on making resolutions for the new year. I tried it some years back, but I just never saw the purpose in resolving to do something simply because the calendar rolls over. I did it as a fad, I guess you could say. When I take an honest assessment of myself, if I realize there's something that I need to be working on, and I procrastinate long enough for it to become a resolution for the New Year, then I don't think that I'm all of a sudden going to find the strength and discipline to accomplish said goals. It's more than likely a set-up for failure and frustration. I know I'm not alone in this. For most of the population, NYR's end up falling by the way side. We always start strong and we fizzle out. The saddest part of this is that it's not as if the majority of these resolutions are made with any real sense of urgency. If they were, why the wait? I can say for myself, most of the things that I tried to resolve in the past were not of a mass importance in the grand scheme of my life. Most of what I vowed to change amounted to nothing more that mild annoyances; things that I knew I need to change or wanted to change, but if I didn't accomplish them no sweat off my back. I live to fight another day, right? I finally came to the conclusion that I was lying to myself and everyone else. I was falling into the trap of believing that by concentrating on particular areas of my life (weight, finances, relationships, work, etc.) that the universal aspects (spirituality, relationship with God) would suddenly get better as well. Once again I'm sure I'm not alone in this. This may seem like a good notion, but what it really equates to is a microscopic view of a telescopic realm; we blow up the little things while the big things become small and practically invisible. Some friends and I were talking last night about what need to change in our lives. The overwhelming conviction seemed to be that as Christians we needed to develop a sense of urgency-- to become deliberate in our resolve to pursue righteousness through the grace of faith that God has given us. A challenge indeed, but one worth engaging-- a resolution for the ages. No more waiting around; We want resolution! When do we want it? Now!!

Out of One, Many--Seeing the Big Picture

Jonathan Edwards was a great example of what the Christian resolve should look like. He didn't wait for a new year-- he would write down his resolutions when he felt the need to do so. I have decided to use his works as my template; to make his resolutions my own for this year and every other year. Edwards' sole purpose was to live a life that would be to the glory and honor of God. It is out of this mindset that his resolutions came. With God's help may we all seek to be more like Christ through the testimony and witness of Edwards.

These are taken directly from The Resolution of Jonathan Edwards (1722-1723):

But seek first the kingdom of God and his righteousness, and all these things will be added to you. - Matthew 6:33 ESV
So, whether you eat or drink, or whatever you do, do all to the glory of God. - 1 Corinthians 10:31 ESV

"The great end of God's works, which is so variously expressed in scripture, is indeed but ONE, and this one end is most properly and comprehensively called, THE GLORY OF GOD" - Jonathan Edwards