"Thus Says The LORD...But I Could Be Wrong": Hittin' and Missin' with Pat Robertson 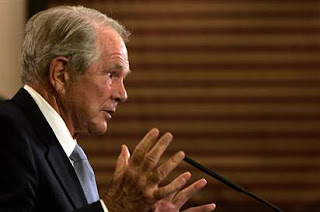 when a prophet speaks in the name of the LORD, if the word does not come to pass or come true, that is a word that the LORD has not spoken; the prophet has spoken it presumptuously. You need not be afraid of him. - Deuteronomy 18:22 ESV

Well, I guess there's no reason why we can't kick off this new year with a bang. It's time for Pat Robertson's Annual "Prophecy" Report:

VIRGINIA BEACH, Va. - In what has become an annual tradition of prognostications, religious broadcaster Pat Robertson predicted Tuesday that a terrorist attack on the United States would result in “mass killing” late in 2007.
“I’m not necessarily saying it’s going to be nuclear,” he said during his news-and-talk television show “The 700 Club” on the Christian Broadcasting Network. “The Lord didn’t say nuclear. But I do believe it will be something like that.”
Robertson said God told him during a recent prayer retreat that major cities and possibly millions of people will be affected by the attack, which should take place sometime after September.

Robertson said God also told him that the U.S. only feigns friendship with Israel and that U.S. policies are pushing Israel toward “national suicide.”
Robertson suggested in January 2006 that God punished then-Israeli Prime Minister Ariel Sharon with a stroke for ceding Israeli-controlled land to the Palestinians.
The broadcaster predicted in January 2004 that President Bush would easily win re-election. Bush won 51 percent of the vote that fall, beating Democratic Sen. John Kerry of Massachusetts. He also predicted Bush’s victory for a second term in 2005.
“I have a relatively good track record,” he said. “Sometimes I miss.”
In May, Robertson said God told him that storms and possibly a tsunami were to crash into America’s coastline in 2006. Even though the U.S. was not hit with a tsunami, Robertson on Tuesday cited last spring’s heavy rains and flooding in New England as partly fulfilling the prediction.

He states that he hears these things from God, yet at the same time he states that, "sometimes I miss". Anyone who is a reader of scripture will have a serious problem with this statement. Where in the text can you find an example any true prophet of God who "missed" on a prophecy? You won't find one because it's not there -- because they get there message directly from God. Robertson claims this as well, however, he can still only boast a "relatively good track record". Can you imagine the fear and confusion that would have been caused if Moses, Isaiah, Jeremiah, Elijah or John had said something this outrageous?! What if the book of Revelation ended with, "but you know, sometimes I miss"? Scripture warns about this time and time again, but it never ceases to amaze what a little media stroke and time in the spotlight can do to a guy. The bottom line is this; prophecy is not a 50-50 business. If you preface a statement with, "thus says the LORD", you better be 100% certain you know what you're speaking. To do otherwise is to take the Lord's name in vain; you are speaking where God has not spoken. Thanks to the grace of God, for Robertson's sake, or he would have been the one to be "taken out", according to the Laws God gave Moses (Deut. 18:20). I pray that Robertson moves away from this sort of foolishness, puts his ego aside and tame his tongue. By his example may all believers learn to rely on the Word of God in Jesus Christ through the witness of the Holy Spirit. Just because a person has a certain position or status in the Christian community, that doesn't make them a prophet. Jesus Christ is still, and always will be, the Final Word of God.


"The LORD your God will raise up for you a prophet like me from among you, from your brothers--it is to him you shall listen--" - Deuteronomy 18:15 ESV

And after six days Jesus took with him Peter and James and John, and led them up a high mountain by themselves. And he was transfigured before them, and his clothes became radiant, intensely white, as no one on earth could bleach them. And there appeared to them Elijah with Moses, and they were talking with Jesus. And a cloud overshadowed them, and a voice came out of the cloud, "This is my beloved Son; listen to him." - Mark 9:2-4, 7 ESV

Long ago, at many times and in many ways, God spoke to our fathers by the prophets, but in these last days he has spoken to us by his Son, whom he appointed the heir of all things, through whom also he created the world. - Hebrews 1:1-2 ESV