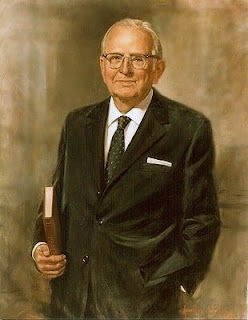 The plans of the heart belong to man, but the answer of the tongue is from the Lord. The heart of man plans his way, but the Lord establishes his steps. - Proverbs 16:1, 9 ESV

For anyone who may be too young to remember or who may have never heard of Norman Vincent Peale, fear not; Peale's influence can be felt throughout most of modern day evangelistic circles. It can be felt so pervasively, in fact, that most people are completely unaware of the influence at all. This is largely due to the fact that much of what Peale "preached" and taught is now being filtered through the writings and ministries of those whom he mentored in his lifetime and those that they now mentor and/or influence (i.e. Robert Schuller, Rick Warren, Joel Osteen, etc.).

But even if you haven't heard of Peale, most are somewhat familiar with his runaway best-seller, The Power of Positive Thinking, which catapulted him from preacher to pundit to prophet (excuse me, that should be profit) in the blink of an eye. Here is a little excerpt of what type insight he gives in his writings:

This may seem at first glance to be nothing more than an innocent old codger sharing his grey-haired wisdom on a park bench like some sort of geriatric version of Forrest Gump, but let the buyer beware. What Peale is propagating is nothing more than New Age Pragmatism. Unfortunately, most have bought into it hook, line, and sinker. American Evangelicalism has swallowed it whole; note that in his time of trouble there is no mention of prayer for God to do a mighty work in their endeavors--to bless it according to His will. Peale's authority was not Paul and the Prophets; it was Plato and "Tessy". That's right, Tessy--a woman who is able to convince a so-called Christian minister that thoughts are intelligent and can actually think (meaning that thoughts aren't thoughts at all, but actually entities that have some sort of "life" to them). To say that I can visualize or speak something into being makes me...mmm...I don't know...God-like. Last time I checked, that's what got mankind into this mess in the first place!! It is blasphemous for me to believe that ultimate control of the universe begins and ends with the thought processes of my mind. Don't be fooled by the ending message scroll in that clip either. Just because he tacks on a scripture reference at the end doesn't make it anymore "christian"; he quotes Philippians 4:13 out of context because it fits his agenda. It's pragmatism 101--he uses what works in the given situation.

New Names, Same Old Thing
Most are convinced that New Age thinking is something that has remained outside of the church, but it is quite the contrary. In his book, Fit Bodies Fat, Minds, Os Guinness states,

But positive thinking has deeply affected evangelicalism too. Historians trace optimistic pragmatism right back to the First and Second Great Awakenings. During this time Arminianism superseded Calvinistic theology. People openly stressed encouraging human effort to transform the human will. Through human effort, then, others would accept the free offer of salvation. Gradually, religion itself was changed. Instead of being a revelation by which we are criticized, it becomes a power to which we are adjusted for the sake of gaining our power--and thus the key to health, wealth, popularity, and peace of mind. Thus the note of "spiritual technology", later picked up by the New Age movement, was introduced first by evangelicals. As one writer put it, "God is a twenty-four-hour station. All you need to do is plug in."

Twentieth-century versions are well known, supremely Norman Vincent Peale's 1952 best-seller The Power of Positive Thinking and Robert Schuller's television ministry "The Hour of Power". ("There is enough power in you," Peale wrote, "to blow the city of New York to rubble.") The former occasioned Adlai Stevenson's celebrated quip: "Paul I find appealing, but Peale I find appalling."

And so the trend continues; Peale is now dead and gone but his ghost lives on. The Christian religion continues to integrate itself with this type of pragmatic, self-help preaching of "gospel" hucksters. There are only two things that I can be positive of here: It's not biblical and it doesn't work. This type of philosophy places man above God as the supreme being in the universe and places emphasis on self-affirmation, rather than self-denial and the affirmation of the person and the work of Jesus Christ (Luke 9:23).

And he said, “Naked I came from my mother's womb, and naked shall I return. The Lord gave, and the Lord has taken away; blessed be the name of the Lord.” - Job 1:21 ESV

But he said to her, “You speak as one of the foolish women would speak. Shall we receive good from God, and shall we not receive evil?” In all this Job did not sin with his lips. - Job 2:10 ESV

“Let me have silence, and I will speak,and let come on me what may. Why should I take my flesh in my teeth and put my life in my hand? Though he slay me, I will hope in him; yet I will argue my ways to his face. This will be my salvation, that the godless shall not come before him." - Job 13:13-16 ESV

Not that I am speaking of being in need, for I have learned in whatever situation I am to be content. I know how to be brought low, and I know how to abound. In any and every circumstance, I have learned the secret of facing plenty and hunger, abundance and need. I can do all things through him who strengthens me. - Philippians 4:11-13 ESV

Come now, you who say, “Today or tomorrow we will go into such and such a town and spend a year there and trade and make a profit”—yet you do not know what tomorrow will bring. What is your life? For you are a mist that appears for a little time and then vanishes. Instead you ought to say, “If the Lord wills, we will live and do this or that.” As it is, you boast in your arrogance. All such boasting is evil. - James 4:13-16 ESV