Blessed Non-Assurance: The Truth About Atheism 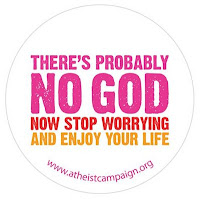 "Science is nothing but perception." - Plato
I ran across this ad for the Atheist Campaign not too long ago. It intrigued me a bit, so I decided to click on the link to see what this was all about. As you would have guessed...it was about, well, nothing (get it - because they're atheists). These were the logos and buttons that could seen around the holidays in the UK and other places that have been designed to try to put the mind and soul at ease (as clearly seen by the slogan). Except for there is one small problem. We'll call it the "Problem of Probability".
How in the world could this set anyone's mind at ease?! If there IS no God, then there's no judgement, no wrath, and no accountability to him (Never mind the fact that the ramifications of such a proposal are horrendous, but we'll save that for another time). But they don't give a definitive answer; all they actually offer is a 'definite maybe'. You would have to be irrational to find comfort in something like that. Truth be told, what we have here is a tell-tale slogan. Most telling of all is the lack of surety, due to the fact that the statement isn't atheistic (no god); it is most certainly agnostic (no knowledge - or not sure of god). So, this leaves one to question:
Why so hesitant to pull the trigger?
Even with all of the popularity surrounding writers such as Richard Dawkins and Christopher Hitchens, no one seems to really be able to put a nail in God's coffin. Nietzsche tried. He failed. Even during the French Revolution, the leaders who abolished the religious structure because they believed in reason ended up making reason itself into a goddess because they realized that people needed something to worship. Why? Because it is intrinsic to human nature. Even when wrongly pursued, the fact still remains that we are inherently aware of the fact that something, someone greater than ourselves governs the order of things in the universe (Romans 1:18-25). This is why George Herbert is right when he says, "The devil divides the world between atheism and superstition".
So even though these New Atheists try to posture behind the guise of empirical scientific evidence and sound reasoning, the truth is that they are no closer to the truth than when they started. It's all word games, straw men, and ad hoc arguments...
Ben Stein Interview w/ Richard Dawkins
"Atheism is a disease of the soul, before it becomes an error of the understanding." - Plato
Soli Deo Gloria,
Shon
Posted by Shon at 12:06 PM

After reading you site, Your site is very useful for me .I bookmarked your site!

Saw your site bookmarked on Reddit.I love your site and marketing strategy.Your site is very useful for me .I bookmarked your site!

Hello everyone! I don't know where to start but hope this site will be useful for me.
In first steps it is very good if someone supports you, so hope to meet friendly and helpful people here. Let me know if I can help you.
Thanks and good luck everyone! ;)

Cool post you got here. It would be great to read something more about that topic. Thanx for posting that info.

I figured it would be a good idea to introduce myself to everyone!

Excellent blog! I genuinely love how it' s easy on my eyes and also the details are well written. I am wondering how I could be notified whenever a new post has been made. I have subscribed to your rss feed which should do the trick! Have a nice day!

Maybe it can just me, but it would be better if in future you can share more about this topic. Keep rocking.

HI, I just joined this community. I m from india. I like this forum.......hope to learn lot of things here ;-)