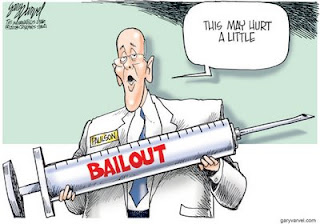 I agree with much of your assessment of the AIG scandal. It's not all that shocking to me to see "Wall Street" irresponsibly mismanage money like that. It's not the first time it's happened. This is just the biggest example and everyone knows about it. There is a lot of greed going on there but as you alluded to, there has to also be some culpability to the "Main Street" portion of the population. The in vougue thing now seems to be to blame the wealthy for all that ails society. It's not just their greed that has put America in the situation it's in today. I believe that much of the "outrage" comes from much of main streets' jealousness and envy of "Wall Street" I think that where much of the problem lies is with people trying to find an easy way in and a promise of something for nothing. Everyone would like to have some of what wall street has but don't necessarily won't to put in the work that it may take to get there and try to make one feel guilty for having made it or don't bother to try and understand what all comes with the package. New cars and homes that many can ill afford but people still sign up for because of jealousy, envy, greed and a need for "status". I think the Lord speaks to both sides in Isaiah 56:11 "Yea, they are greedy dogs which can never have enough, and they are shepherds that cannot understand: they all look to their own way, every one for his gain, from his quarter."

Well said, Angry...Amen and Amen! Thanks for the comment.