Seeking What He Sought: The Legacy of John Calvin 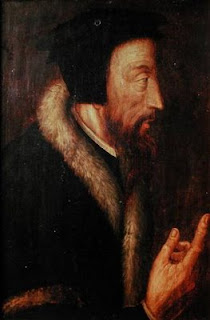 Today is the 500th anniversary of french protestant theologian, John Calvin. I was surprised to see how much controversy has come about due to the "festivities". Some in the christian (Protestant) community argue that it is idolatry to celebrate/venerate a man. I've read several articles today before beginning to write this - both pro and con - and now would like to share my personal thoughts as I weigh in on the issue.

I've said it before: there is a fine line between veneration and idolatry. Unfortunately, sometimes that line gets crossed, even by some within reformed (Calvinistic) theology circles. However, I don't believe that this is what's going on here. This is the quincentennial celebration of the life and legacy of Calvin. To my knowledge, it is not made a habit to celebrate the birth of Calvin every year on such a grand scale. This is a milestone, nothing more.

Truth is, the Protestant community is indebted to John Calvin. Calvin's Institutes of Christian Religion was the first work to systematize the Protestant Christian Faith. Also, he is not appreciated for being the statesman that he was. The governmental/constitutional structure of the United States owes a great deal of gratitude to Calvin. But, these facts, as well as many other examples, go largely unmentioned. He is a much more pivotal figure in history, who doesn't get as much attention as some others in Christian history, due to his lack of flamboyance.

That being said, I'm pretty sure that Calvin himself wouldn't want his life to be memorialized in any way. So, is there a way to honor the man, while not dishonoring his wishes? Or greater still: can we honor him in a way that doesn't cross over into idolatry?

In the words of Bruce Lee,

"It is like a finger pointing at the moon; if you concentrate too much on the finger, you miss all of that heavenly glory!"

We should see the life of Calvin as that finger. Not seeking the seeker, but seeking what he sought: that Christ be magnified in all things (John 1:7-8, 6:29). This was the chief end of everything that Calvin ever said, did, or penned (Mark 12:29-31). As we remember him today, remember more importantly to thank God for the likes of John Calvin. Also, pray that we, as the Church, will have a heart akin to Calvin:

One that is offered promptly and sincerely to the work and glory of the Lord being expressed in all areas of life, to all creatures everywhere, as truth for all time.

"Set before [man], as the prime motive of his existence, zeal to illustrate the glory of God" - John Calvin