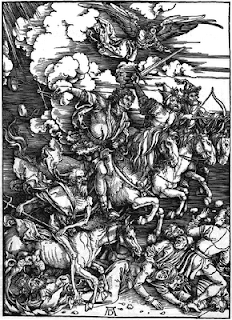 I originally posted this on January 11, 2006 because I knew this day would come (pun intended).
But on a serious note, people being misled by false prophecies and teaching is a serious matter, and I pray that this helps to shed some light on why it is so important to use discretion in what we listen to or read on such matters; and also that we remember to let the Scriptures themselves be our guide and final word on how eschatological (end-times/last things) matters will take place. Forget what you've heard...read THE Word.


"If the world were to end tomorrow, I would still plant my apple tree."
-Martin Luther
It never fails. Something catastrophic happens, particularly in the Middle East, and some prophecy "expert" comes running out of the woodwork screaming "Bloody Armageddon". The reason that history seems to be repeating is because people don't pay attention to it. The present generation of the time always has an air of arrogance about itself; they want to believe with all their might that they are way more corrupt than the previous generations. "Those guys were amateurs, but we are the real deal! Rotten to the core!" This may sound like a ludicrous sentiment, but this is really what it amounts to (of course, it is phrased a little differently).


Every generation has had it's share of catastrophes; bad ones, too. They happen all over the world. However, we in the west seem to have a particular "itis" for this kind of thing; Apocalypse-itis, if you will. The danger of becoming too consumed with "The End" is roughly two fold:


1. Falling into the trap of clock watching and date setting.

This is inevitable. Have you ever stopped to watch a clock for one minute? That minute seems like an eternity. And when that minute comes and goes, what do you have to show for it? A minute lost. Nothing is gained in that minute because you stopped to watch it go by. You'll never get it back again. The same thing happens when we stop to watch the "prophetic clock" as well. Yes, we are supposed to be watchful, but this is pushing it far beyond its rational conclusion. We are also to be sober-minded.
This is the first step into our second and most appalling error:


2. Forgetting to spread the Gospel !!


Instead of being productive by being about the business of spreading the Gospel (which is the purpose of the Church in the world), we withdraw into ourselves waiting to make a "great escape"; To hell with everyone else - literally. Knowing the end could come at any moment should further strengthen our resolve to share Christ with the lost, not cause us to abandon our post.


Don't get me wrong, I anxiously await the return of the Lord as much as any Christian. But as long as we are on this earth, first and foremost, we should be engaged in fulfilling the Great Commission. It's not our job to concern ourselves with how and when the end will come. God has graciously given us plenty to keep us occupied. But just in case you do start to feel a little jittery, here's what you can do to take your mind off your worries:


Share Christ with someone. Then, go plant an apple tree.


"While the earth remains, seedtime and harvest, cold and heat, summer and winter, day and night, shall not cease."
-Genesis 8:22 (ESV)

"When a prophet speaks in the name of the Lord, if the word does not come to pass or come true, that is a word that the Lord has not spoken; the prophet has spoken it presumptuously. You need not be afraid of him."
-Deuteronomy 18:22 (ESV)

What a great web log. I spend hours on the net reading blogs, about tons of various subjects. I have to first of all give praise to whoever created your theme and second of all to you for writing what i can only describe as an fabulous article. I honestly believe there is a skill to writing articles that only very few posses and honestly you got it. The combining of demonstrative and upper-class content is by all odds super rare with the astronomic amount of blogs on the cyberspace.

Hi - I am certainly happy to find this. cool job!

Hey - I am really glad to find this. Good job!

Hi - I am really delighted to discover this. cool job!