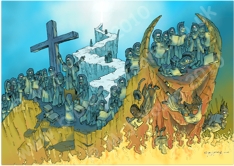 Beloved, although I was very eager to write to you about our common salvation, I found it necessary to write appealing to you to contend for the faith that was once for all delivered to the saints. For certain people have crept in unnoticed who long ago were designated for this condemnation, ungodly people, who pervert the grace of our God into sensuality and deny our only Master and Lord, Jesus Christ.  - (Jude 1:3-4 ESV)

We are on the precipice of an exodus...

Rob Bell says to just say no to the notion of Hell
And Joel Osteen says I can have it all and have it right now
(Did I forget to mention that both of those are bestsellers?)
Oh well - Farewell to the deferred gratification
Of being face to face with the Savior
And since everybody wins
There's no need to repent
For our misguided thinking and behavior

In a pine box and a hearse
"Off with his head!"
But blessed are the dead
Those who die in the Lord from now on

We are on the precipice of a resurrection...

But I thought you knew that all along?!