Up With Slavery (The Ballad of Uncle Ruckus) 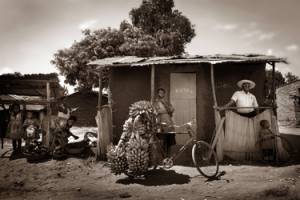 "...we've gone from black is beautiful to black is ghetto." - Dr. Carl Ellis

We went from being property to President

Hobbled by our own lust
For the so-called “American Dream”
Took our newfound freedom for granted
'Cause all we cared about was forty acres and the C.R.E.A.M.

Livin’ in white rooms with black curtains
We’ve got a culture that still hurtin’ –
“Cash Rules Everything Around Me”
And we’re its loyal and humble servants
Blackface, you know
Has a different look to it these days…
It exists in the form of
Gold Chains, Bentleys,
Swisher Sweets, and Three-ways

I know what you’re thinkin’ –
What in the hell happened to the ‘Talented Tenth’?!”
Well, the dollar became their Almighty Allah
And you know they gotta pay rent
It’s a high price to pay
When you render unto Caesar;
Pawned your soul for a “Jesus Piece”
And Sickle Cell Anemia

Shuckin’ and Jivin’ –
Never claiming his daughters
Now she’ll grow up and repeat the cycle
‘Cause it’s all that men have ever taught her
No, he ain’t tryin’ to stay
But he’ll pay to have her give it up
Or to “make it go away”…