Enemy of The State

I'm an enemy of the state of mind 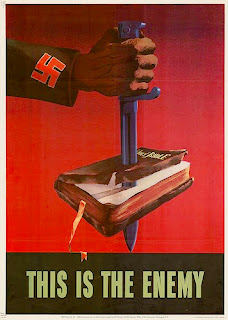 That tells me that ignorance is bliss...
Homey, that's a hiss
A lick to tickle the ears
Something to soothe our deepest, subconscious fear
That is searing our collective conscience like a hot iron
And firing across the great divide
Between reason and cosmic treason
Because we deem it a way better option
To credit creativity to the creation
And fashion ourselves in the way of logic
Instead of "Our Father in heaven..."
We're always willing to go one god further

Make 'em up as we go along
And then turn around and say that
Religion is a pestilence
(Pay no attention to the evidence)
Yeah, this is what's wrong with society
Still praying every night that someone would come along
And worship me
Or at the very least, let me do as I please
But we wouldn't call that sovereignty
We call it "freewill" -
"Doin' whatever suits me
And I don't even gotta take a pill"

Homey, wake up!
You are still in the Matrix
The Oracle was always wrong
And Morpheus is a sadist
This is real life
Where the strife comes by the boatloads
And we've still got starving children in Africa
And dudes smokin' each other in the 'Hood
Over shoes and clothes

I'm at odds with the atheistic narrative
So I'm labeled narrow-minded
I refuse to be blinded by the Zeitgeist
'Cause it ain't nothin but a bank heist
You jack the riches of another worldview
And then apply it to your own life...
(Minus the sacrifice, of course)

Homey, that's a myth
Wishful thinking being fleshed out in a valley of dry bones -
I stand opposed to giving up everything I have
To try to hang on to all the things
That I will never own
You see, it's not foolish for a man
To stand against the odds
The portrait of a proper fool
Is a man that says there is no God
It's a fallacy and a fraud
Because deep down we know better
You stand in the rain with no umbrella
And honestly believe
That you won't get any wetter
Only to raise a fist
Because if God truly exists
He should've granted you sunny weather

My dude, you're a debtor
And that storm is a privilege
Because it falls on the just and the unjust
But you see it as a menace
Homey, you don't run this
Everything you've got has been a given
And if the Lord sees fit to take it away
He could snatch it from you in an instant
Health, wealth, and prosperity...
All are handed out on the basis of Charity

But you don't get it, see
That grace don't come cheap
Because we get what we don't rightfully deserve
And that seems to only feed the beast
So we feast on each other
And anything else we can get our hands on
What we don't got is exactly what we want
And everyone else always has a greener lawn

Same song, different day
But I'm strummin' it the other way
Backmasking the track on helter skelter
So you can hear
That the price has already been paid...

Soli Deo Gloria,
Shon
Posted by Shon at 3:54 AM